We were in Brisbane for our final day in Australia. So we made the most of the day with a trip to The Workshops Railways Museum with the boys’ grandparents.

The weather was terrible, so we took two devices to keep the rain away. They’re called umbrellas.

The railway museum has become an annual visit each time we’re in town for holidays.

It’s a great place for people who enjoy trains – young and old. It’s nice to see Lewis now enjoys the workshops as much as Myles does.

The only slightly unfortunate thing (for people on the north side) is the museum’s all the way down in Ipswich.

Since Lewis is still toilet training, the hour or so train trip is fraught with danger. My nose was in overdrive. In fact, I quite regularly asked Lewis if he had to poo as I could clearly smell something very unpleasant.
After Lewis denied any activity for about the tenth time I noticed the horrid stench was actually coming from the guy that was sitting behind us. It was confirmed the next station when he got off, and the train’s odour improved markedly.

A couple of police asked to see our tickets on the train. They were impressed to see my boys wearing Junior Police hats that the boys’ Nannors bought them from The Ekka. The police got off the train with us when it terminated at Ipswich. And to our luck, they were happy to get a photo with us (see below). 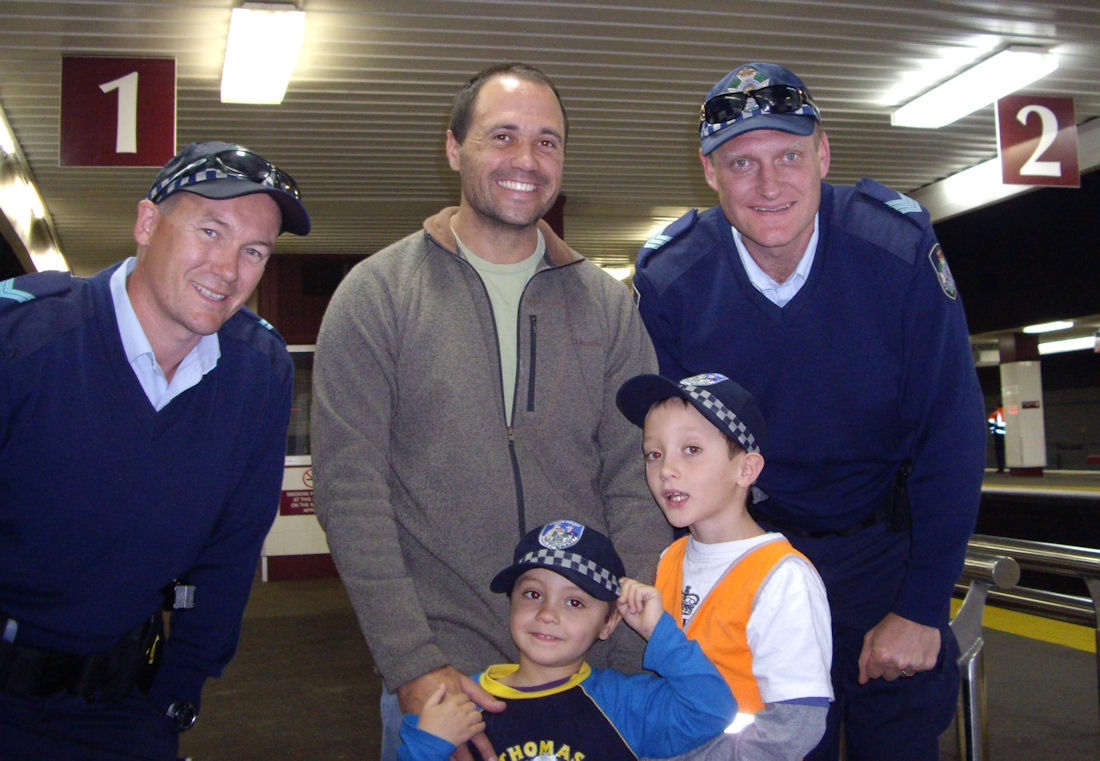 I couldn’t help but feel like a criminal with four people around me wearing police caps, and me looking quite scruffy and unshaven. It was probably unfair of me to suggest that on this end of the train line the hats could make Myles and Lewis targets for non law-abiding 6 and 2 year olds.

As it wasn’t the weekend or a local holiday, the workshops was quiet. It gave my boys the power to do whatever they wanted to for as long as they liked. So we drove a lot of train simulators for a long time.

We caught the train home, which from the Ipswich line can be quite interesting. Sitting in the next four seater was a huge Maori guy and his girlfriend. Lewis stared at him – which isn’t a good start – but then it got worse. Lewis decided to point straight at the guy and ask us why the guy “has a string there”. We didn’t know, and the guy who also heard this didn’t know what was meant either. Then after a few moments he realized Lewis was referring to his long thin “rat’s tail” of hair extending down, which the guy showed us. It was all quite jovial, thankfully. When Lewis asked why he had it, I asked why Lewis didn’t have one. I should have known better. Lewis now almost in conversation with the guy, explained that he didn’t have one cause he’s a boy. It was at this point he guys girlfriend laughed out loud. The poor (now almost demoralised) guy could only share with a wry smile that “he really got me”.

All in all a good day.

Now we’re at Brisbane International Airport waiting for boarding time to our flight back to Dubai.