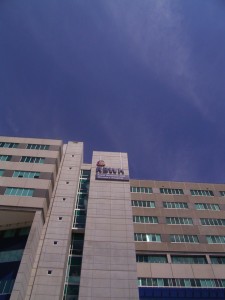 My wife and I have spent most of the last two days at the Royal Brisbane and Women’s Hospital.  Yesterday afternoon she started getting the first signs that our baby’s coming.  So off we went.

After a wait in one room, then another room where a few traces could be performed she was admitted to the ward.  The labour was not forthcoming, so they thought it was a better venue than our place for playing the waiting game. Unfortunately this didn’t turn out to be entirely correct.  Amongst the three others who share the same ward, two are very loud and constantly talking about their issues with what appears to be their utter moron partners or relatives; and the other snores EXTREMELY LOUD, all night.

Hopefully the prescribed sleeping tablets will do the trick tonight, as tomorrow morning is showtime!  My wife’s name has been added to the emergency board to get a caesarisan section at the first opening – between 9 & 10:30am.  It almost sounded like a tradie’s timeframe when the young doctor said it to us, except that she was so articulate and educated.

While the hospital is a beautiful place where babies are brought into this world, there is a lot of things to get you down. For one, as you enter there is always a mass of carcinogens from patients that felt the need to have another cancer stick.  The ugliest thing in the world is certainly a heavily pregnant mother smoking. It’s not nice seeing anybody smoke, but knowing that an innocent baby is stuck in there getting the same poisons going into their blood makes me sick just thinking about it.  Let alone having to navigate your way around them to get into the hospital.

And in an unfortunate irony, it’s hard to miss seeing at least one amputee in the resulting unfresh air puffing away. I can’t help but wonder if smoking may have caused the loss of their limb.

It’s also not nice to see and experience the tremendous, and nearly unsatisfied demands on the health system.  We probably spent 90% of our time in the hospital waiting for people just to get back to us.  There was more than one example where staff said they were trying to get back to us but they were swamped. I know it’s not their fault, they’re trying their best.  The nature of the industry means there will always be some times when they’re flat-out. And unfortunately the current situation in the South East of Queensland is that the demand is increasing at a rate that exceeds our capabilities at satisfying it.

At least the extended waiting time allowed me to read the 100s of pages which made up two of our major weekend papers.  I rarely get enough time on the weekend to finish the sections I put aside to read – let alone the whole thing. So that part has been good.

And mum and baby are doing well, so tomorrow morning we’ll get to meet the latest Brinkworth – who we’d call “Boody Gum Gum” if my first son had his way.