Last weekend a friend’s niece wanted to go to Wild Wadi Water Park for her birthday, which sounded like more than a good enough reason to go.  In fact, the reason was overkill. I wanted to go anyway.  In the day or two leading up to it, I felt as excited as a 12 year old.

We arrived close to the opening time, which is definitely a good idea. It is far quieter before lunch than after. In fact, Saturdays I hear they open from 8am for families which would be even better, to avoid the hottest part of the day. 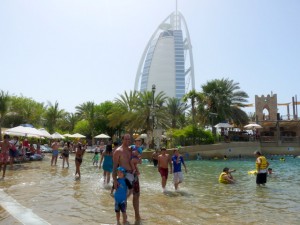 Myles, Lewis & I with the stunning Burj Al Arab backdrop

The place is very easy to find, just find the Burj Al Arab and more or less drive to the bottom of it.  Or, follow the signs.

Parking was simple as well.  Things were going too well.  We were brought back to Dubai reality at the ticket counter.  We received the tickets to get in only after more than 30 minutes of painful dialogue and tinkering with the register, and a receipt which was almost a metre in length.

If we were a bit cheesed off then, we would even more cheesed off a few seconds later as we hit a security check-point. They were going through all bags to remove any food or drinks. And to our surprise, this included water. We managed to accidentally smuggle in a large bottle of water under the pram, which always helps.

All was forgotten once we could smell the water and hear the screams of people enjoying themselves. I’d say the park’s arrangement is probably a little obscure if not eccentric. We managed to find a row of banana lounges right next to the kids park which we made our base. Then everyone went in their own direction.  I spent the majority of my time in the kids park with Myles. But I didn’t mind this at all.  It was loads of fun. I did get questioned a couple of times though to make sure I did have a kid with me. They either didn’t spot Myles going down the rides like a bullet in front.  Or perhaps I looked like I was having a little too much fun.

After a little while, the grown-up guys suggested we act like grown-up guys and made a move toward the obligatory huge steep slide that water parks the world over have.  But finding the actual line for it turned out to be harder than you’d expect. In fact it was too hard for me, I gave up. When we were still looking for it we even found a ride which seemed to take us in the right direction until we were on it, and we found ourselves back to where we started. The ride was interesting to say the least.  We were given huge inflated donuts to sit on, and the slide was actually sloped upwards at a 30 degree angle. We travelled up the hill powered by huge squirts of water.  The power from the jets of water was so strong the sensation was (what I’d imagine to be) like that of a bidet jet.  I did the ride once on a shared donut with our friend’s 9 year old.  The second time on an individual donut where it wasn’t as embarassing to be the loudest screamer.

The place had racks of life jackets everywhere for people to freely use. I guess it’s a sign that a lot of the visitors can’t swim. Although I wasn’t used to seeing it, it was nice they were giving it a go. I never thought about it, but I guess if you can’t swim in Australia you simply wouldn’t go to these kinds of places.

The time at the park flew so quickly. We originally had planned to leave just after lunch which meant staying at the park for 3 hours or so. In the end it was a struggle to leave after 5.  If we didn’t have dinner plans that night, we certainly would have stayed much longer.  But we know where it is, and what tickets to now ask for, and what not to take in, and where all the rides start and end, so we can always go back.  Although, we’ve received advice that there are even greater water parks in other emirates of the UAE which we maybe should experience before returning to Wild Wadi.

I’d certainly recommend going to Wild Wadi at least once though. It may be more popular (busy) than the others, but the variety of rides and the views of the Burj Al Arab and the Jumeirah Beach Hotel are spectacular and I believe cannot be beaten.