There’s only so many times I can read Myles the two or three kids books we have here before I go crazy.  And I think that point has passed.  All our books are still in storage in Brisbane. And knowing we’ll just have to move again means we don’t want to buy too many more right now.

Besides, Myles and I used to love visiting the Brisbane City Council library on the weekend and regularly getting a new bagful of books.  It was also a pretty cool place to just sit and chill-out.  We have been wanting to try the same here, but other things have always taken priority. Tonight however, I thought we’d finally visit a Dubai library.  “Gertie” – the name we’ve given our female-voiced GPS – gave us some pretty terrible directions. We were pretty much led onto the Metro’s tracks, so we had to do some rapid reversing, then a  large detour to get to the library.  The original directions suggested we’d make it there from our house in five minutes, including the traffic it was almost 45.

When we got out of our car Myles asked if he’d be allowed in, which I thought was a pretty odd question. It turned out to be well-founded. As we entered the gate a security guard walked straight up to us and said Myles wouldn’t be allowed in. Then he asked how old Myles was. I said four, which made him shake his head. Only six year olds are allowed to enter the library.

Next to the main library building there was a “Children’s Library”. Surely we could get in there, nope – he said it was the same deal. Only six years and above. I said we were just having a look, can we at least do that.  He said we’d need to test it with the staff on duty.

We did. And failed. The lady immediately asked how old Myles was, and four was the incorrect answer. I suggested he was very smart and is very good with books, but she was not wanting to budge. When I asked why they had such a rule, she said kids at four cannot read, and they make a mess of books.  I didn’t agree, but that made no difference.

The only ground I did make, was I’m allowed to get a card for myself, then I can take a  family loan of kids books. As she was saying this though, she seemed to be reducing herself to the fact Myles would most certainly ruin her books anyway.

This situation was quite upsetting for poor Myles. He was looking forward to going to the library this evening, so much so he almost ate all his spinach. His hopes certainly ended though with the ridiculous circular rule that kids should only read books when they’re able to read books. So I decided to get the library card another time – Myles would have to wait in the separate kids library while I did that anyway.

When we got outside I consoled him by saying we’d buy him a book instead. I spotted a bookshop sign from across the busy road. We made our way to it, and when we got close enough I saw it was an Islamic religion book shop. Hmm.  We entered anyway, and they did happen to have a small kids non-denominational section. I picked up the classic educational resource pictured. Not only does the cover have a misspelt title, it also has some odd graphics which bear no resemblance to any of the content.  It does have a train though. And it was a great relief to the slap in the face the Dubai library provided. 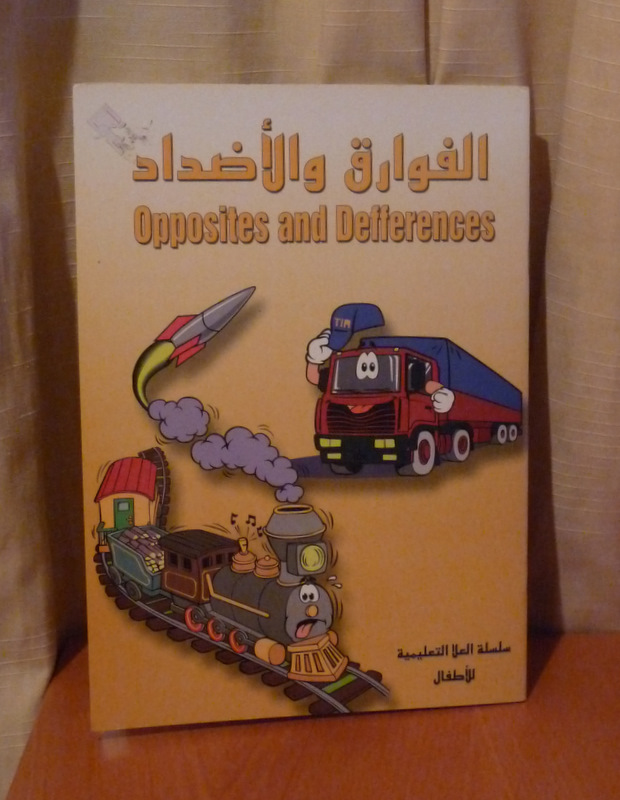