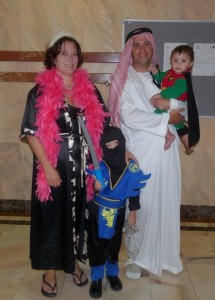 All dressed up. Elle's a lady of the night, Myles as a ninja, and Lewis as Batman's off-sider, Robin

This weekend we attended a fancy dress pool tournament party at a friend’s place. They had a wonderful villa with their own private backyard which is a bit of  a luxury in Dubai. They made the most of it and had two large dogs running around. It would be so much better environment than the majority of dogs in Dubai – including the ones we hear in our apartment complex.

It was tough to come up with something for me and my pool partner go to this party as.  We wanted to either bring something Australian, or locally. The final idea, after many options, was to do a delightful corny play on words and dress as “Sheikh, Rattle & Roll”.  We bought some local Kanduras (robe/dishdasha) for the sheikh part, we had baby’s rattles, and – running out of inspiration – we hung some bread rolls from the outfit.  The final piece was perhaps not the greatest idea, as we had the dog closely following us around for most of the time.  My head piece was probably normal sized, so it failed to fit my watermelon-like cranium. So unfortunately it fell quite a few times which gave the dog the split second opportunity on two occasions to quickly snaffle up the bread rolls I had.

We thought the dog was just following Paul & I for the bread rolls, but it turned out the dog was actually owned previously by a local guy who wore the same clothing. The story goes that the dog may have been mistreated as he is apparently not a big fan of the local dress. So it was perhaps our fault when the usually friendly hound nipped the chin of one of our fellow revelers, in an unprovoked attack. Or perhaps it was just the excitement of the evening.

The night was organised for a number of reasons. It all came clear when the cakes took over the pool table, where we were allegedly playing a keenly organised and Microsoft Excel powered tournament. Not a lot of competition there, one of the games was lost off the initial break — by none other than my wife, Elanor!  Perhaps she could have been more useful out on the street, she and my boss dressed as ladies of the night.  The party was for the one of the ex-PNG pilots who made Captain, as well as a host of birthdays which would prove difficult to celebrate together as most people avoid the Dubai summer.

A good night was had by all – even the “Man in skirt” who briefly masceraded as dog food.  Unfortunately we had to be one of the first to leave, as we probably had close to the youngest kids there. Lewis was asleep for a great deal, but the noise became too much. And when he finds that second wind, it’s difficult to put him back to sleep.  And also difficult to make him enjoy himself.  Mind you, this was 12:00 midnight when we left, early. The party consisted mostly of the local PNG community, who know how to party!  Just ask my Aunty in Cairns who has PNG folks next door.

The other good thing about PNG parties, is they know how to put on a feed! We were tasked with bringing Elle’s famous potato salad, but left it on the bench at home. I intended to return home alone to fetch it after we arrived, but the hosts insisted there was more than enough food, which there was.