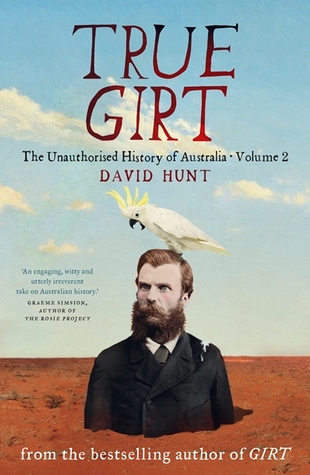 True Girt by David Hunt
My rating: 4 of 5 stars

At the outset, it’s probably a good idea to clarify, this book is not “True Grit“ by wee-drinking author Mr Bear Grylls. Although if you’re after a tale of desperate and deprived actions of slightly deranged people in perilous conditions, you may not be disappointed. *sound of tucker bag being zipped up*

I enjoyed this follow-up to Girt.  Both books provide a great antidote to the shiny history of Australia we were taught in schools ‘down under’. Many of the key figures in founding the land became celebrated as place names, but it took a volume like True Girt to aptly describe how many of these characters were.. well.. a bunch of pricks.

Along the way, we appreciate how unique Australia is.  Where else is there a such a massive convict past, a sponsored horror of injustice against the original inhabitants, an unexplorable land so enticing to work-experience explorers, and then an uprising culture of rebels who appear to this day as tattoos amongst proud pre-grownups? And then there was the discrimination against other religions and races – glad we sorted out that issue long ago.

Australia has a history that beggars belief, but it’s what a few of us call home.

Many gold nuggets were shared, like Australia inventing what became standard democratic processes (with a few oversights).  And we finally learn the collective noun of Hipsters. It makes sense.

True to the author’s word, this follow-up has even more hilarious moments where I laughed out loud before looking around nervously.

The guilty laugh is what I'm going for… The guilt will ratchet up a bit more in True Girt, out end of the month

I look forward to whatever next installment comes.

A good thing about history, it doesn’t stop.