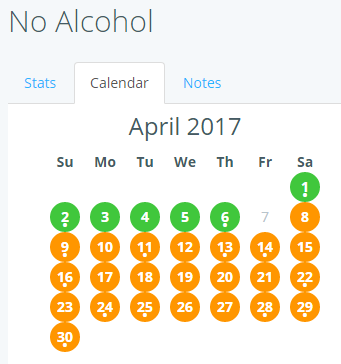 Once again, I challenged myself to drink no alcohol for the month of April. And I pretty much succeeded.

I failed to check in on one day – which does stand out on the calendar.  It happened after a lot of deliberation with myself. I decided a friend’s (all-inclusive) wedding was a reasonable excuse to enjoy a few drinks. I convinced myself it’d be rude of me not to.

Throughout the year I feel I’m a moderate drinker.  Some nights I enjoy a beer or two.  At times though, it feels a little too much of a habit. And the reasons to enjoy a drink seem to outweigh the many positive reasons to not have one.

April is a good enough Cold Turkey demonstration that I don’t need alcohol in my life.

I knew I could do it. Although the notes I logged through the month don’t seem to show an unwavering resolve: 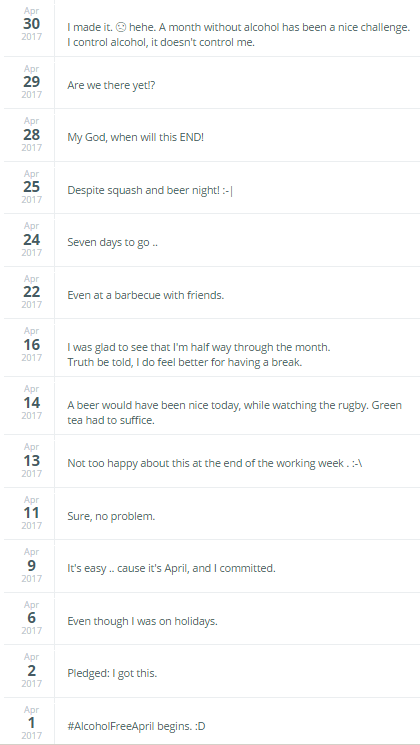 Once the month was done, I joked that I could wake up at 12:01am on the 1st of May and get smashed, or wait until breakfast. Instead, I stayed alcohol free a few more days into May, which is a good sign.

I might now consider a few further teetotaler initiatives which people refer to through the year.

There is the increasingly popular Dry July fundraiser, and the month of Oc’Sober’, and “No Alcohol November” which might be a good lead-up to the excesses of Christmas.

In fact because of Christmas excesses, in January I used to reactively take a month off alcohol.  The results were impressive. On top of no alcohol, I would return to eating normal foods and quantities, and easily drop around 4 kilogrammes.

The end of this #AlcoholFreeApril made me think further into an idea I had for a supportive system – dare I say it, mobile app.
Its goal would be to help people understand their own drinking habits. It’d do this objectively, and set such clarity that it’s easy to follow progress. And intelligently it would encourage/”gamify” when it would be better to not have a drink.

Here are a few of the features I’ve considered:

OR, you could just go through life using your own will-power; supplemented with the occasional month off.

Although, where is the fun in that?