Yesterday morning I lined up to participate (not compete) in yet another Dubai Marathon ..

This year’s event had extra interest with a confident Kenenisa Bekele declaring he was going to break the world record.  On top of the glory of owning the world record, there was a nice $250,000 reward on offer for bettering the mark of 2:02.57 ..

#Dubai, are you ready?

Bekele’s campaign had the strong support of Nike and the Sub 2hr project sport scientists.  Unfortunately it didn’t help, as he sadly tripped at the start line.  It made the near impossible task, simply impossible.

Before my start, after the obligatory toilet stop and obligatory follow-up toilet stop, I made the long distance back towards the start. There I passed a massive queue of people. I thought to myself it’s a relief to have gone to the other toilet block, as there was no waiting. I soon learned this throng of people wasn’t for the toilets. It was the queue for the bag drop, which I needed. It’s the first time I’ve seen such a massive delay to literally “drop” something.

What terrible organisation to put the bag drop so close to the start/finish area and have it single-file the whole way.

It wasn’t until after the race when I went through the recovery area, picking up drinks and a banana, that I noticed how convenient it was to have the bag collection right there as we exited. What wonderful organisation.

This was to be my ninth full 42.195km marathon event. Experience adds some comfort to know that you can complete it.  On the other hand it provides no comfort from the pain.

This year I had no real goal time.  Beating last year’s time would be nice, returning to near 3:30 form would be superb. Realistically I just wanted to finish in relatively good shape, and avoid grinding to a halt.

I needed to try extra hard to run conservatively. My #DubaiMarathon #irony

Along the way, I was entertained as always.

In the first 10 kilometres I saw a guy running in a Spartans shirt. He was relaxed and running quite conservatively. I imagined he was saving his energy to slay a few dozen Persian warriors at the finish line.

Another shirt that grabbed my attention was “fast food” brand McDonalds. I felt it pretty important to pass that one.

It was then quite a milestone to run past Superman at the 16km mark. He was a big hit with the many kids cheering along the side of the course.

To gain my own super advantage I resisted the urge to try some of the Sub 2 hour juice,

Signed, sealed and delivered to the race organisers ahead of tomorrow's #DubaiMarathon ! Let's go Bekele! pic.twitter.com/Ft0AoR1ejT

Instead I took some gu gels for energy. The gu were in each of my shorts pockets, and when I tried to get one out another dropped onto the ground. Bugger. Do I stop to pick it up, or forget about it? As I looked down, the packet magically slid along the road back in front of me. A runner behind me had kindly, and quite skillfully, kicked it back to me while in mid stride. Despite his efforts, I decided the energy to slow and pick it up would outweigh the benefits the gu would give.  So I just kept on running.

The weather was quite warm – the hottest Dubai Marathon yet according to some runners. I clearly remember feeling thirsty throughout the run. I drank from every water spot, multiple drinks at some. I even started availing the unofficial stations, like those of the Dubai Creek Striders, the Desert Road Runners, and Abras squads; as well as a random congregation of Chinese people – though I avoided their interesting offering for marathon runners, salty potato crisps.

Despite drinking as much water as I could, and using it to keep my body cool, I did struggle in the last stages. My pace dropped, thankfully it was a much later inevitability than last year.

I’d like to say my smile got bigger with each kilometre marker. Perhaps my grimace got no worse.

At 40kms, a helpful Arab encouraged me by telling me there were two kms to go.  “Hurry up and in three minutes you’ll be finished – yalla!”

The finish line, like all finish lines, was a blessing.  I didn’t track the run very accurately on my apple watch with some mistaken pauses. So I really had little clue about what time I’d see as I approached the line.  It was 3:51, which was a 3:49.58 net finish. Five minutes slower than last year which I can live with – and still thankfully under the four hour mark. 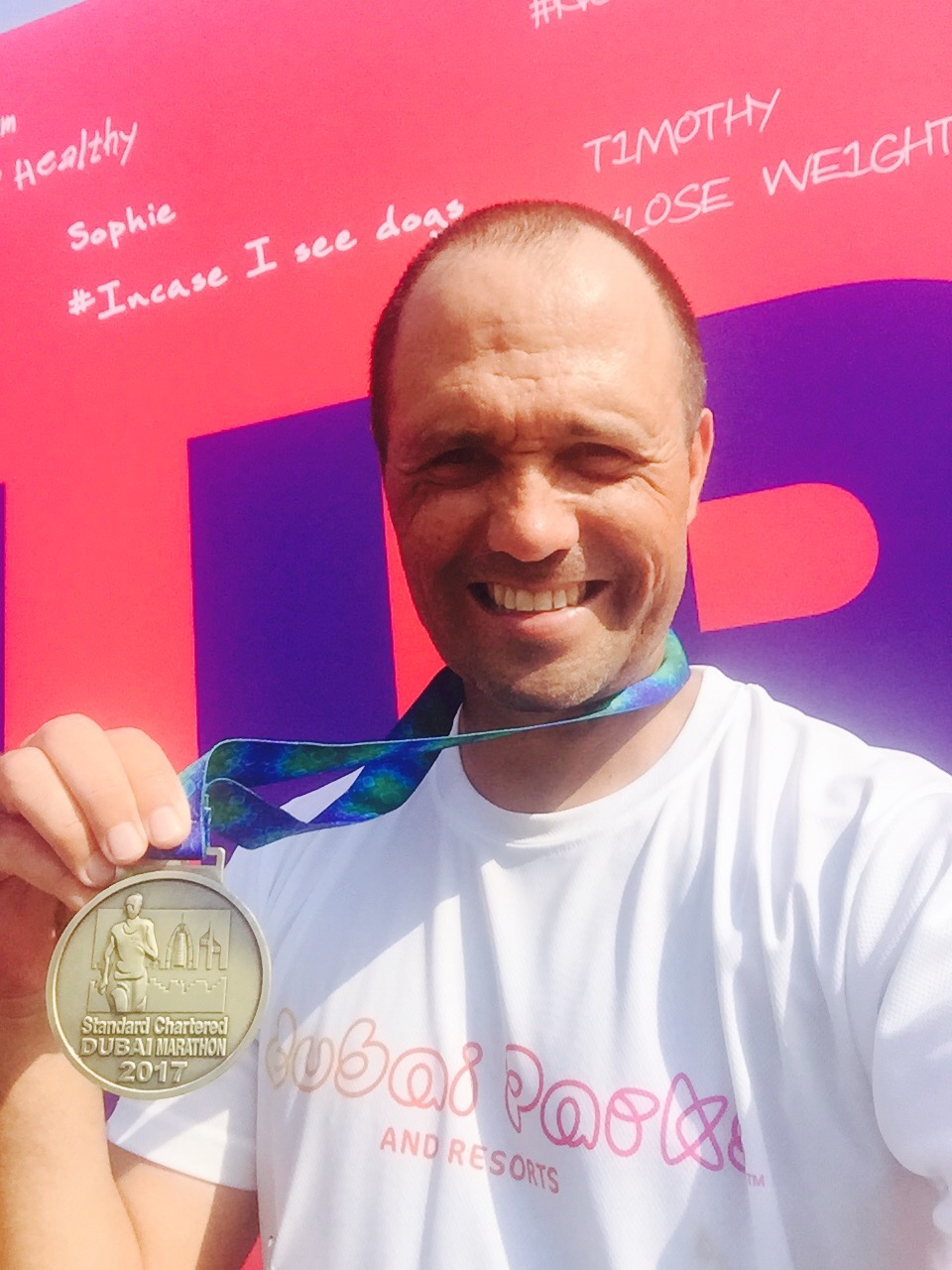 After I collected my stuff, I enjoyed the adidas rest area.  Some other runners enjoyed it a whole lot more.  A couple of ladies, looking fresh as daisies after their marathons, easily spent 30 minutes getting hilariously flamboyant photos next to the merchandise and posters. Then they’d get them taken again, from more and more angles.

I found watching it almost as tiring as running the final 5kms.

Before the race I took two Ibuprofen to help avoid some ongoing niggles in my hip & knee. I like to think of it as a proactive measure. Nope. Seeing other marathoners limping so painfully, the Ibuprofen was clearly cheating.  Cheating which I will do again.

All the marathon podium places went to Ethiopians:

Ethiopians, yet again, dominate the #DubaiMarathon.

It’s always a highlight to see how well the Ethiopians perform, and to see the passion of their supporters in the crowd.  They all look so beautifully happy, wearing their distinctive colours, singing for their champions.

This completed my ninth marathon in 10 years.  It would be quite neat to complete another one this year ..

First I must let my new shoes get broken in a little more, and let my blistered feet heal:

I'm unsure if my post #marathon toes look like gangrene or frostbite. Either way, a doctor would certainly recommend they be amputated.