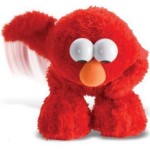 Ryan, the General Manager at the Tickle Me Elmo factory, was asked by his wife to find a job for a good friend of hers who was having some trouble securing a job.  Knowing the friend in question, Ryan was hesitant but in the end agreed to find her something at the factory.  But he thought long and hard for a role that the lady wouldn’t foul up.  Eventually he figured out something dead simple.

The next day he showed her through the production line of the factory, and her workspace and explained what she needed to do. He asked if she understood, and she said it was no problem at all.  So he left her to her work, and said he’d drop by at lunch time to see how she was going.

The two of them walk down to the production line and there was a terrible back-up with Tickle Me Elmos falling off with such a build-up.

Ryan followed the big line of Elmos that weren’t moving all the way to his wife’s friend who seemed to be the cause.  She was working furiously at the end of the line where he had instructed.

But she was holding the Elmo doll upside down, and with the greatest of care she was picking up two little ball bearings and a piece of red material, then pain-stakingly sewing these little balls over Elmo’s groin area into a little pocket.

At this Ryan blew his cool and screamed to the lady, “No, no, NO!  I told you to just give Elmo TWO TEST TICKLES!”