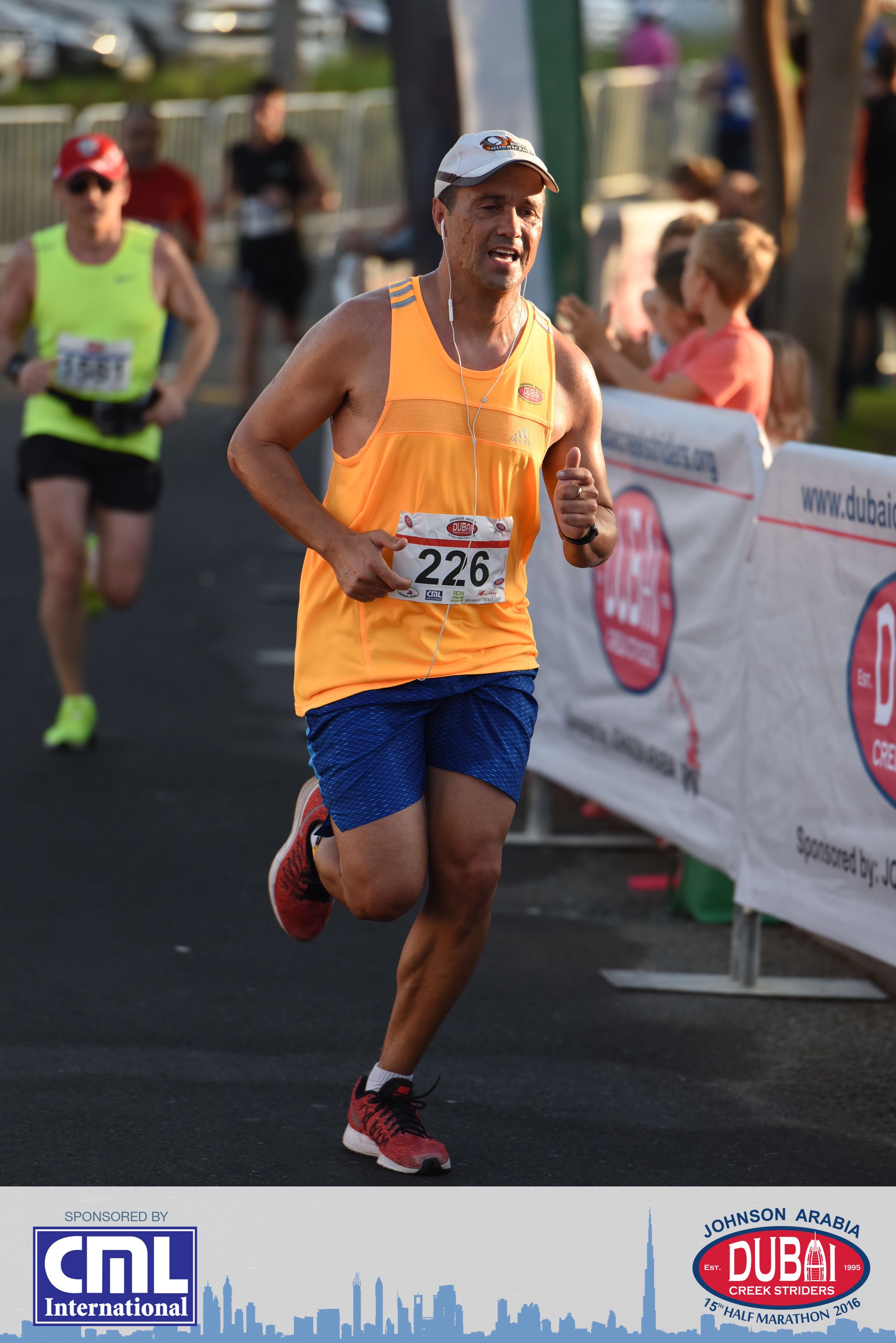 It’s clearly a race I don’t want to miss.

Every year the event gets bigger and better.

As I began running with the large community of Dubai runners I wondered, what colour would you need to wear these days to stand out?
Fluororescent colours have returned to fashion.  And there were running kits of every other colour and shade. I noticed even past running shirts from obscure events are rarely alone. It was interesting to see us running as a full palate of running regalia.

This year I wasn’t aiming for a quick time, preferring to run conservatively as a training session for next month’s full marathon.  In fact, I was quite nervous about what pace I should stick to.  Each time I decided to pass somebody, it was only after  I had quite an internal debate. On one occasion I wondered if I could pass the guy in front, then I looked up and was surprised to read on his shirt “Unlikely”. Was it an omen?  It turned out the shirt is from the Unlikely Runners group. I love that honesty in marketing.

A little later I caught up with the pace runners for people aiming to finish in less than 1:45. I checked in with the leader whom I knew.  I had to ask, if I ran ahead and they later catch up to me, are they then required to carry me? Nope. They were quite clear, they’d kick me up the butt.

With that motivation, I gradually ran off (with a slight worry).

I realised also, countries and nationalities become irrelevant during running events. At a running event there are merely runners, and supporters. For anybody running, I sympathise with their effort, and have a deep, specific respect for them. And for anyone there that isn’t running, they’re supporting and I appreciate them fully.

Addendum: Scrap the thought that nations become irrelevant. It turns out, I was the 1st Australian to finish for my age category. I left a massive contingent of 8 people in my dust. HA!

Once again I chose to listen to music while running.  And again, I had an issue. Selecting my “Run Calm” playlist from my running tracker, only played the songs I had locally-stored on my phone. What happened to the huge & brilliant selection I have curated in the cloud?

When you’re listening to music during an activity, it has less than your full concentration.  SO I guess it took a few run-throughs for me to notice my phone was playing only four different songs. 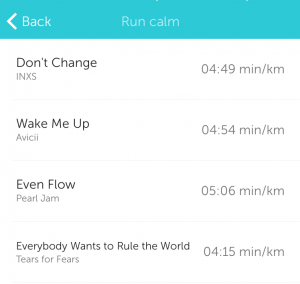 Exhibit A: My playlist

I tried talking reasonably with Siri to skip and change play lists, but that just freaked out the people running alongside me.

I decided to continue through it. For some reason, repeating music seemed better than none.
In fact, bopping along a few times to a song like Even Flow by Pearl Jam seemed quite helpful. When I couldn’t quite understand the lyric
“Moths are all like butterflies,
He don’t know, so he chases them away”
it seemed helpful that I could listen more intently to it in a few minutes.
I later researched the lyrics, They’re actually,

How many more kilometres of this song looping would I need to run to get those lyrics?

As a song finished, I was able to hear a clicking sound at a regular tempo, though not quite in sync with my running steps. I immediately figured it was one of those people with a sophisticated watch beeping far too often at a regular pace to help the runner keep their steps or heart beats in time. These are so annoying to everybody else around. I look over to the person running beside me and roll my eyes – communicating, “Oh dear, we’ve got one of them with us”. But then as the volume of my next song increased, the sound of the clicking reduced.  Oops. The sound was always there and it was quite clearly the noise from my headphone cable hitting my race number bib.

As I was getting into the final quarter of the race, I considered upping the tempo to finish strong.

I used to have an extra gear to finish fast and overtake pretty much anyone in the vicinity. Now I feel more like a taxi driver asking for directions.

I finished more steadily in 1:41.14, which was two minutes slower than the same race last year. In the scheme of things, that’s quite reasonable.

The next stage of the event was the Breakfast Buffet.  Here I feel I may have had a personal best.

There’s nothing quite like the feeling of accomplishment after a 21.1km race; then replacing double the calories that were burned.

The only complaint with breakfast was that at our table I was sitting with an impressively overflowing plate of bacon and pork sausages, while a humorless Dutch couple sat next to us to share a tiny box of cornflakes & milk. I think they should be banned next year from participating.

The prize-giving went through with very few surprises.  The regular male open winner was from Uganda,  and the women’s open winner from Finland is becoming a regular. I wonder if I was the only person who was imaging what would happen if these running freaks from two different continents had babies together.

Again, it was a hugely enjoyable event to kick off the start of the running season. I look forward to next year.