I experienced my first birthday in Dubai.  I received some handy gifts. Of note was the remote control toy car Range Rover that Myles picked out. He slyly asked if he could use it some times. He’s dreamin’.
It’s different from having a birthday at home in a number ways. For one, the birthday boy or girl needs to bring in the cake, or sweets to work. So I made a dash to the Lebanese sweets shop around the corner and bought a kilo of mixed baclava on a tray. It turned out to be only just enough.
I sent an email out at work that it was my birthday and people were welcome to the sweets. So many people made the effort to respond or tell me best wishes for the day, it was lovely to see how sweet and sincere everyone was.
During the day I also found that they weren’t joking about me shouting lunch either. Fortunately a mate didn’t realise it was my birthday and suggested we go to the burger joint, so I got out of it very cheaply! 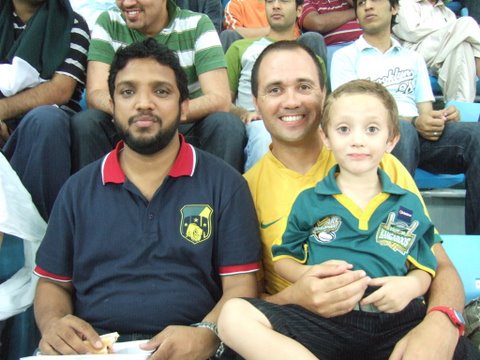 I finished a little early to get prepared for the Twenty20 cricket match between Australia and Pakistan. It was a little bit worrying that the Australian embassy felt the need to provide a specific warning about this. It really only covered the behaviour you should follow in the UAE anyway.

Australian citizens planning to attend the Australia-Pakistan cricket matches to be played in Dubai and Abu Dhabi between 22 April and 7 May 2009 are reminded that local laws and penalties apply to you. It is important to remember that we are guests in the UAE, and that we must respect the UAE’s laws and customs.

We left in plenty of time, as Thursday evenings are terrible for traffic even without the extra burden of a cricket crazy population getting to a local match. After a wrong turn which we couldn’t easily return from, we only just made it to Dubai Sports City in time. It was a little frustrating that we could then see the stadium, yet there was no way yet to get there directly, and there’s also no parking in sight. Not sure how this is possible in a desert with sand everywhere. Dubai Sport City is also a construction site so there is space everywhere.

We followed the already growing number of cars stuck in a line towards the designated parking areas. Eventually we found a park just over the road from the ICC headquarters.

Fortunately they had shuttle buses operating from the parking area from the car parks as we were probably 2 – 3 kms from the stadium.
The stadium looks like a giant marshmallow from the outside. It has giant sails at the top half, the rest of it is what you expect from a new world-class stadium.

There were so many people trying to sell us scalped tickets, or “black tickets” I had to check if it was illegal. It was.  Just maybe not policed very well.

As we got into the final lines to get in we were frisked by beefy security. It was from there we saw a large shiny helicopter, so we figured His Highness Sheikh Mohammed was present.

Once inside the ground we were free to walk into any section we pleased, with the exception of the VIP areas. The VIP tickets were more than 12 times the price of our cheap seats in the atmosphere section. It made no difference however if you bought one of the many other ticket categories. They all just piled in together, and we weren’t allocated a seat.

I saw on the big screen a sign, “We’re eating kangaroo curry tonight”.  Another one that got a laugh when it was displayed was “My wife thinks I’m at work”.

I had never been to see a T20 match before, but they certainly look more exciting on TV. The organisers tried hard, including cheerleaders, but in keeping with the local sensitivities, they all had bright white tights beneath their short skirts.

Australia batted first, which usually means they’ll win.  But not this time.  The game started quite well for them with a good strike rate. But it didn’t last too long, with wicket after wicket.

When Andrew Symonds came out to bad, it was disappointing to hear a section behind us doing the controversial Monkey chant. Fortunately it didn’t last long as Symonds was out first ball. It was a new look Symonds, sporting a shaved head, perhaps this was a mistake as he suffered a similar fate to  Samson without his locks.

The ease with which the Pakistanis were bowling us out made it look like they were throwing down a golf ball. Our final score was a mere 109.  When Brett Lee was bowled out I thought he would have been licking his lips at the change to bowl on the wicket, but he didn’t make an impact. To cut a long story short, in comparison it seemed like we were bowling a soft ball to the Pakistanis as they smashed the ball around every which way.

Australia won the one-day series, but were extremely outplayed in this Twenty20. This was a good result for the crowd. The Australian fans were severely out-numbered. There was one section entirely made-up of Australian shirts, but they were all Indians. On closer inspection, the shirts were branded with Multiplex, so it seemed like they were only there as part of a work junket.

Some of the more vocal Pakistani fans pose with us

The row in front of us, the rest of the row behind us, and the row behind us were all very vocal Pakistani fans. My mate translated their chants which were entertaining. The most used was “PAKISTAN JITEGA” – ‘Pakistan will win’.  Even before the end of the match, I was cheering it also. Another was asking where are the Australian fans, but they didn’t hear Myles and my screams.

The Sheikh’s helicopter had gone by the time we began piling out of the stadium. It was clear he knew something we didn’t, the means to leave the stadium was hopeless.

The shuttle bus service to get us back to the cars got terribly stuck in traffic, so we ended up walking the distance back to the car. Then once we got onto the road we didn’t move for around 20 minutes. We then noticed that our hold-up was just go get us to the u-turn point to join the other road that hadn’t moved for 20 minutes either. Eventually we ditched this, and followed the brake lights of some other cars that seemed to be moving. This was a winner.

It was a great evening. We eventually got home just before 2am. 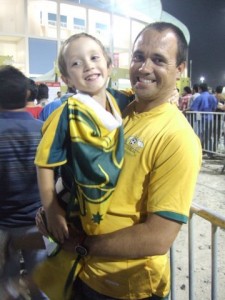 Myles and I - in the minority - wearing plenty of Australia gear