This year we had our first Christmas in our adopted country, Dubai. Being a Muslim country and away from all family, it was always going to be different. But it was still extremely enjoyable with some good friends taking the usual place of family.

It seemed that most of our friends went home, or decided to travel over the Christmas break. I should mention, the Christmas “break” was a break by accident only. The holiday season is irrelevant over here. We were just fortunate that December 25th happened to fall on a Friday – the first day of our weekend.

We knew a handful of friends were staying in the building Christmas day, so we invited them to come to our place for a traditional Christmas lunch. Well, not quite traditional. We happily substituted the baked ham for a baked lamb as we had Muslim friends join. And also, the Christmas crackers that we’d expect to pay a few dollars for in Australia were the equivalent of $77 AUD a packet. So we got the cheapest kiddy ones, and used them sparingly. 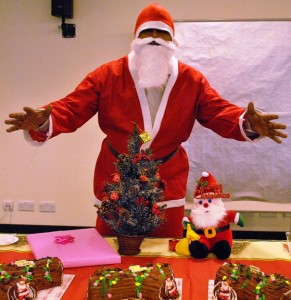 Our Emirates Group IT Santa

For the months before, there were quite a few shops advertising the Christmas season which surprised me. We were even able to buy a tree – we chose the only one that would survive the attention of a headstrong 1 year old called Lewis. So it was certainly beginning to look a lot like Christmas. We even had a Christmas lunch at work which was unlike any Christmas lunch I’ve ever had. Karaoke was the theme of the day. And Santa was not as pale as I recall. He had dark skin from the Asian subcontinent, as well as a penchant for Bollywood dancing, which made for a fantastic entrance!

It also seemed at least one of the local police were in the spirit of the season when he booked me just one muqalifer(?) – fine – instead of the two I was deserving.

The traffic infringement happened on the way into work. I found myself in the wrong lane for the turn I wanted to make, so just like everybody else – which is apparently no excuse – just before the traffic lights I cut over a solid line when I saw a break in the traffic. This got the attention of a policeman on a motorbike, that I did see a few minutes earlier. He shouted a few things at me, and the only thing I comprehended was driver’s license which I gave to him. After this he wanted to see the car’s book (registration). I was driving a friend’s car while they were out of town, so I had no clue where the rego paperwork would be. I tried all the obvious places starting with the glovebox. I didn’t want to make the policeman more angry so I started handing him each piece of paper in there. Handing him things from the kids’ school didn’t help matters. We drove a little further where we could stop. He started dishing out a few more fines to people as he parked his bike – man this guy was efficient! I used the extra time to search the car completely, but to no avail. When I checked the boot I spotted an “I love UAE” scarf on the back window. I half-considered inconspicuously putting the scarf around my neck to appeal to his patriotism and let me go. But I thought better of it. At times like this there’s probably a fine line between trying to make a genuine connection with a guy in authority and taking the piss. The fine was just for “Not presenting vehicle registration card when required”. He dropped the charge for cutting the line. Ho, ho, ho.

Otherwise the Christmas was great. Technology enabled us to beam into my family’s Christmas celebrations in Australia, where everyone was well. Our boys loved riding their new bikes and Insha’Allah won’t break any bones. And our table full of friends – who incidentally spanned four continents – all shared what Christmas has always meant to me, having fun and enjoying the company of others. That is, despite all of us eating way too much – an obligatory Christmas tradition!

In fact we had plenty of food remaining, so we filled a few plates and sent them to the security guys who work in our building. Ordinarily they’d gobble this up and be extremely grateful. But it was sort of pleasing to hear that they couldn’t accept the food. Their fridge was already overflowing from loads of other tenants sending down food for them also. ‘Tis the season.

The day after Christmas I woke up early at 5:00am to watch some of the Boxing Day (Cricket) Test match – a bit of an Australian festive tradition.  After watching just half an hour of play between Australia and Pakistan, I had the clearest demonstration of the time difference between Dubai and Australia I’ve had.  Despite rising before the sun did in Dubai, play had already finished for the morning and it was time for the lunch break!

I hope everyone else had a lovely Christmas.