After eight months living abroad we finally took our first holiday. On October 17 We headed home to Australia for four full weeks.  Work had been quite hectic leading up to this. My manager is still unsure how I managed to get her approval for this amount of leave.  It was quite simple really, quietly mumble the request while she was distracted talking to someone else, and just take any of her body language as a positive response.

The flight from Dubai to Australia is a long one – wind-assisted and direct it’s still 14 hours.  I scored some big brownie points and let Elle take the business class seat, while I had the kids in economy. The plane was so full we had no choice, despite us deciding to forego our contractual business class seat to sit altogether.

On my own it was a little worrying to think of the large number of hours for a five year old and a baby to fly, but it really did go quite quickly. Myles and Lewis were an absolute dream. Lewis, our baby beefcake, is now 12kgs which means he’s too heavy to go in the bassinet to sleep, but not light enough to want him sitting on your lap for almost a whole day.  It started with some humour. Myles always took a lot of interest in the safety card of each aeroplane.  He’d study it for 10-15 minutes, each side, and ask lots of questions if there’s something he didn’t completely understand. Well, this time it was Lewis’s turn. To keep him occupied, I handed him a few different cards from the seat pocket, and Lewis started reading the safety card intently. Myles noticed this, and gave some classic 5 year old big brother advice, “Lewis, that’s a sad, sad, story”.

I managed to get a lovely neighbour from the UK named Pam who was very helpful when things got too busy. She didn’t have to do too much, but it was great at times such as when Myles decided to go to the toilet more often than normal. The novelty of the small toilets was too much for him.  He also suggested he needed to brush his teeth numerous times after they gave him a tiny toiletry set.

The cabin crew were really good to Myles, and they clearly enjoyed his company. This was despite Myles earlier showing no loyalty to our beautiful Emirates airline, and buying an Aer Lingus airport set. This is the second time he’s done this. When they flew to Dubai he came proudly displaying the same airport set with QANTAS insignia.

Elle did a stint in economy, which allowed me to at least get some business class tucker and watch a movie.

And before I knew it, we were in Brisbane to start our holiday.  My brother picked us up in our X-Trail, and we had a go at driving on the other side of the road again. Funnily, it’s harder to change back from left-side drive to right-side drive, than it was to originally change over. We had to modify our driving considerably from how we’ve learned to drive Dubai for fear of getting locked up by Queensland Police.

We got to my parent’s place where a huge Welcome home banner got our immediate attention.

We deliberately made very few concrete plans in case any of us suffered badly with the effects of jetlag. In the end there was nothing major,the kids adapted particularly well. Before we left, Lewis was napping four times a day, and eating at every other opportunity. The six hour time difference just means meal #3 lines up with maybe meal #1, which he has had no complaints about.

The only thing scheduled for our trip was my graduation ceremony on the 22nd of October at Monash University in Melbourne. This left us about a week of hanging around Burpengary to relax into holiday mode. Which did take a little while.  One thing that helped though was trying to complete a cryptic crossword for the first time. They really a nonsensical form of torture. Their baffling effect focuses all your thinking on just how unintelligent you are – a great way to forget the stresses of work.  Eventually I probably got a quarter of the clues, and that’s where it was left. 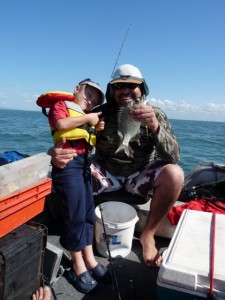 Myles (and Corey) with one of his bream

We were quite fortunate to have my brother take Myles & I out fishing in his boat on his day off.  The location was Scarborough, and with Corey living less than 2 minutes from the boat ramp I correctly assumed he had sufficient local knowledge to make it a successful trip.

Myles & I talked it up in the car about who was going to catch the most number of fish.  Obviously I supported his totally unrealistic goal to catch the most number of fish, but put little actual thought into it coming true.  It didn’t take long to learn that Myles was a superior fisherman to me, with is probably not too surprising.  But landing more fish than Corey – the keen angler – and LARGER fish as well was quite unexpected although a great result for any five year old.  The results were Ryan 1 fish, too small. Corey 3 fish, all too small. And Myles 5 fish, 4 of them HUGE enough to eat. Which we did that evening. Thanks Corey!

And after a day and night in Melbourne the travel plans were to spend two weeks in Tasmania, then one final week in Queenland before flying back to Dubai on the 12th of November, which is approaching at the speed of light.